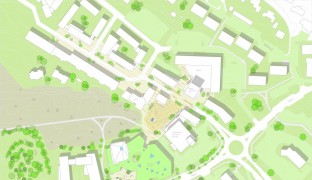 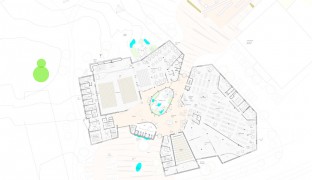 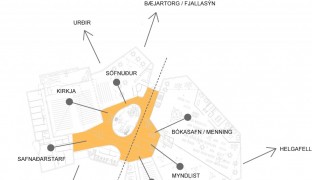 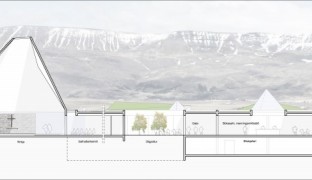 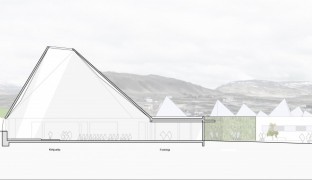 Mosfellsbær is a small community north of Reykjavík, the capital of Iceland.  One of the major attractions in Mosfellsbær for years has been the Álafoss factory outlet in Álafosskvosin, on the site where Icelands woollens industry was launched more than a hundred years ago.
Mosfellsbærs favourite son is Halldór Laxness (1902-1998), winner of the Nobel Prize for Literature in 1955. He was born in Reykjavík but at the age of three moved with his parents to the farm Laxnes in Mosfellsdalur valley, where he lived until he published his first novel at the age of 17. After more than two decades of almost continuous travel and writing under the nom de plume Laxness, which he took in homage to his childhood home, he had a house built nearby at Gljúfrasteinn, where he lived almost until his death in 1998.
In january 2009 there was an open architects competition for a combined church and culturalcenter containing among other things library and mucichall .  ASK Architects won the 2. prize
Our proposal was to build a modest building, considering  the environment on  the site which  consist of  turf, rocks and wild flowers.  At the same time, we are building in the center of the town aside of the main square.
The total size of the building is 6.300 m².